One of the “Three Kings of the Blues Guitar” (along with B.B. King and Freddie King), he stood 6′ 4″ (some insist more), weighed in at least 260 lbs (118 kg) and was known as “The Velvet Bulldozer”. He was born Albert Nelson on a cotton plantation in Indianola, Mississippi. During his childhood he would sing at a family gospel group at a church. He began his professional work as a musician with a group called In The Groove Boys, in Osceola, Arkansas. He also briefly played drums for Jimmy Reed’s band and on several early Reed recordings. Influenced by Blues musicians Blind Lemon Jefferson and Lonnie Johnson, but also interestingly Hawaiian music, the electric guitar became his signature instrument, his preference being the Gibson Flying V, which he named “Lucy”.

King was a left-handed “upside-down/backwards” guitarist. He was left-handed, but usually played right-handed guitars flipped over upside-down so the low E string was on the bottom. In later years he played a custom-made guitar that was basically left-handed, but had the strings reversed (as he was used to playing). He also used very unorthodox tunings (i.e., tuning as low as C to allow him to make sweeping string bends). A “less is more” type Blues player, he was known for his expressive “bending” of notes, a technique characteristic of blues guitarists. Jimi Hendrix also played a right handed guitar restrung to standard guitar setup (low E on top).

His first hit came with “I’m A Lonely Man” written by Bobbin Records A&R man and fellow guitar hero Little Milton, responsible for King’s signing with the label. However, it was not until his 1961 release “Don’t Throw Your Love on Me So Strong” that he had a major hit, reaching number fourteen on the R&B charts. In 1966 he signed with the famous Stax record label. Produced by powerhouse drummer Al Jackson, Jr., King with Booker T. & the MGs recorded dozens of hugely influential sides, such as “Crosscut Saw” and “As the Years Go Passing By”, and in 1967 Stax released the legendary album Born Under A Bad Sign.

In the 1970’s, King was teamed with members of The Bar-Kays and The Movement (Isaac Hayes’s backing group), including bassist James Alexander and drummer Willie Hall adding strong Funk elements to his music. Adding strings and multiple rhythm guitarists, producers Allen Jones and Henry Bush created a wall of sound that contrasted the sparse, punchy records King made with Booker T. & the MGs, but these records were no less excellent or as effective, though not as consistent. Among these was another signature tune for King with “I’ll Play the Blues For You” in 1972.

His work on Stax Records, a company known more for Soul music, was never monotonous and has a timeless appeal that eludes almost any other Blues artist.

King influenced many later blues guitarists including Jimi Hendrix, Eric Clapton, Mick Taylor, Mike Bloomfield, Gary Moore, and especially Stevie Ray Vaughan, who also covered many of King’s songs. He also had a profound impact on contemporaries Albert Collins and Otis Rush. Clapton has said that his work on the 1968 Cream hit “Strange Brew” and throughout the album Disraeli Gears was inspired by King.

King died on December 21, 1992 from a heart attack in Memphis, Tennessee, but he played till the very end. Walsh spoke at his funeral, saying Albert King could blow Eddie Van Halen away with his amp on stand-by. This was probably not a knock on Van Halen, so much as an example of the difference in the audible and emotional power in King’s playing and the popular Rock and Heavy Metal guitarists at the time. Although not the household name of a B.B. King, Albert King is often cited as more influential. Both Blues and Rock musicians imitate him constantly, whether they know it or not. He has a star on the St. Louis Walk of Fame, but has yet to be inducted into The Rock and Roll Hall of Fame.

1970 Blues For Elvis – King Does The King’s Things, Stax Records

1977 I’ll Play the Blues For You, Tomato Records (with John Lee Hooker) 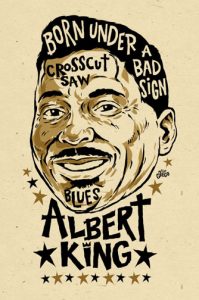