Blind Lemon Jefferson was a groundbreaking artist on many levels, and is the undisputed father of Texas blues. His innovative guitar style — probably partly influenced by Mexican flamenco guitarists — featured a flair for arpeggios (playing each note of a chord separately rather than in unison), unconventional use of bass notes and unusual phrasing as well as jazz-inspired improvisation, all of which paved the way for the many brilliant Texas guitarists who would follow in his lineage, from T-Bone Walker to Stevie Ray Vaughan. Walker, in fact, knew Jefferson and was directly influenced by him. Even early in his career Jefferson’s remarkable talent was evident. He built a fan base playing on the streets of Dallas, and was able to provide for his family on those earnings. He recorded close to 100 songs within only four years, and his commercial success broke ground for male blues singers in an era where the genre was dominated by women, such as Ma Rainey and Bessie Smith. As a talented songwriter he shifted the common practice of blues vocalists primarily performing songs written by others. His original material includes many blues classics. 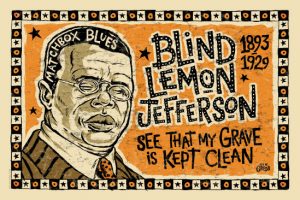