Charley Patton is the uncontested father of the Delta blues. His ferocious, high energy performance brought the house down on a regular basis with a gritty, raw vocal style and an ability to act as a one-man percussion section with his guitar, creating an innovative flow of rhythm and counter-rhythm. His uninhibited performances onstage were reflected in his lifestyle — he was a match for any one of his musical descendants as a hard drinker and womanizer. Patton’s legacy has inspired, directly and indirectly, generations of both blues and rock and roll musicians. The guitar gymnastics of Jimi Hendrix and Stevie Ray Vaughan are echoes of Patton’s performance style, and his use of rhythm and “popping” bass notes presaged funk by decades. Patton influenced and played with blues greats Son House and Willie Brown, and also influenced Robert Johnson, Muddy Waters, Howlin’ Wolf, Johnny Shines, John Lee Hooker, and Pop Staples, among many others. 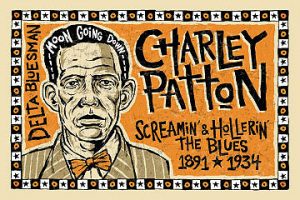