Some music critics maintain that no one has ever matched T-Bone Walker’s genius as an electric blues guitarist. His extraordinary talent influenced blues and rock greats, including Chuck Berry, Jimi Hendrix, B.B. King, Otis Rush and Stevie Ray Vaughan, among others. Walker was born into a musical family, and Texas blues legend Blind Lemon Jefferson was a family friend. As a boy Walker reportedly acted as escort to Jefferson when the blind musician played on the streets of Dallas, and was definitely influenced by Jefferson musically. Walker began his career in Texas and later moved to Los Angeles. Walker’s absolute authority with the instrument translated into precise, incendiary musicianship complemented by a confident, masterful stage presence. His ability as a vocalist was every bit as impressive, and he is the author of many blues classics, including “Stormy Monday,” which has been covered endlessly and would probably appear in any top 10 list of the best blues ever written. 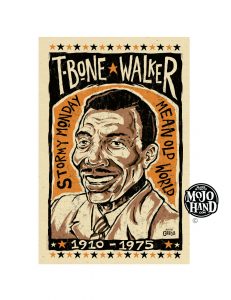 Walker was born into a musical family with both his parents working as musicians. He took up the guitar at age 13 but played various other stringed instruments as well. Walker’s earliest influences were Lonnie Johnson, Scrapper Blackwell, Leroy Carr, and Blind Lemon Jefferson–all advanced stylists at the time. In his early years, Walker worked as “lead boy” for Jefferson, leading the blind guitarist around the city to play for crowds and pass the hat. By the time he was 16, Walker was making enough money on his own in Dallas to become a professional, working various dances and carnivals.