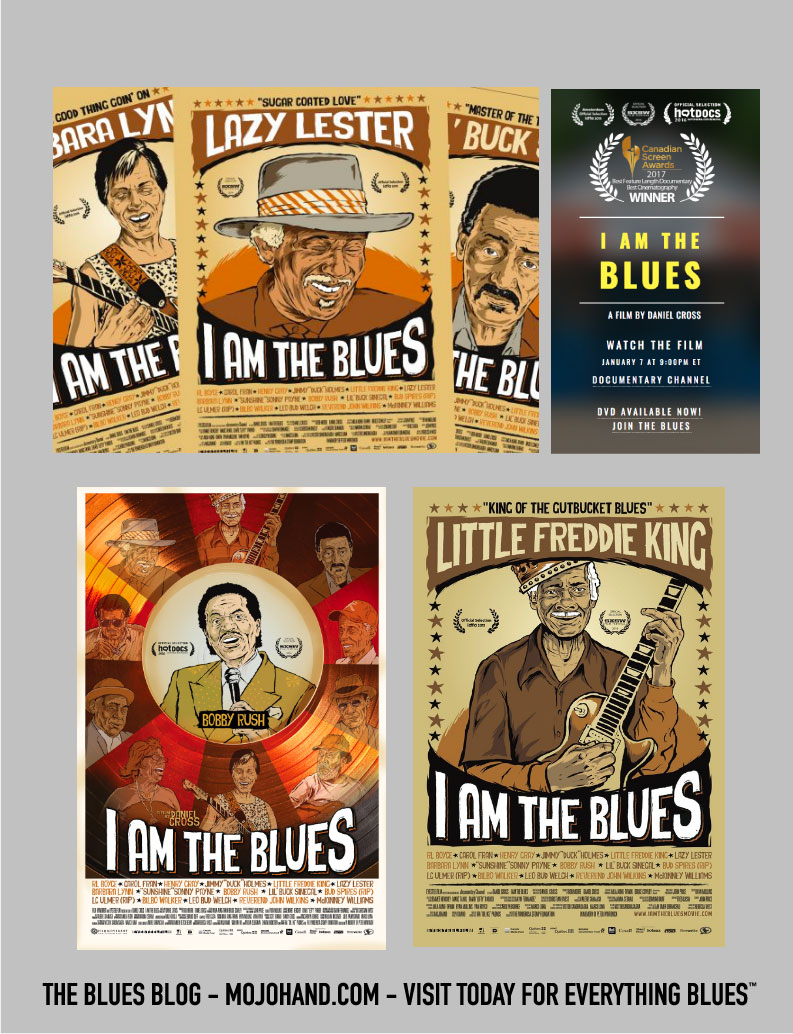 Hit documentary “I am the Blues” turns to Grego Anderson and Mojohand.com for an authentic Blues look!

Where did Daniel Cross and the team at Eye Steel film turn when they needed Blues art? Grego Anderson and Mojohand.com, of course. I created nearly a dozen images and posters for the award winning Blues film, and had a blast working with the guys making a film so near and dear to my heart. – Here is a review of the film:

A rambling, unpretentious music documentary made in the spirit of Alan Lomax and Les Blank, Daniel Cross’ I Am the Blues tags along through Mississippi and Louisiana as aged performers swap songs and recollections with each other. Bobby Rush is the closest thing to a household name here, though connoisseurs will be just as happy to see Lazy Lester, Barbara Lynn and others, many still in fine voice. It’s not the kind of production that begs widespread art house play. But as the doc tours the country in theatrical bookings, it will be warmly welcomed by lovers of music that hasn’t had its rough edges sanded away.

Rush is our mobile guide here, talking from the driver’s seat as we cruise down toward a crawfish boil in Louisiana, but Jimmy “Duck” Holmes plays an equal role by staying in one place: He’s been manager for four decades of a cinder-block shack called the Blue Front Cafe, said to be the oldest juke joint in Mississippi. Anyone not sure what makes a “juke joint” will be edified here, as we’re treated to both stories of the Chitlin’ Circuit’s heyday and scenes of less organized present-day revelry — with a handful of patrons dancing in midday to whomever picks up a guitar to play.

With the exception of a concert seen briefly at the film’s very end, no performance here seems to have been organized for a paying public. There’s a casual thrill to some of the impromptu playing we witness: R.L. Boyce, sitting on an amp in the front yard, contributes some of the best moments, with buddies on harmonica and a single drum jumping in when they feel like it. Others spend more time swapping memories: L.C. Ulmer, for instance, gets a laugh recalling how even the fearsome Howlin’ Wolf was “scared of Jimmy Reed.”

As the film shifts focus to that crawfish boil/old-timers’ reunion (presumably organized for the doc’s benefit, though it feels unforced), we get some more conventional but no less enjoyable storytelling. Carol Fran recalls the one-night stand that inspired her song “Emmit Lee,” tearing up as she listens to the single’s final notes; Texan Barbara Lynn demonstrates the unusual way she uses her thumb while playing electric guitar. Talking about the themes and tropes of blues lyrics, somebody tosses off the beautiful observation that “the Devil got blamed for a lotta stuff he didn’t have nothin’ to do with.”

The film’s speakers occasionally touch on the social realities that gave birth to and are reflected in blues music, but making sense of that big picture isn’t really this movie’s point. Somewhat shapeless (in an enjoyable way) and lacking any strong narrative throughline, this modest but valuable document resonates nicely with a statement near the end: “Let me tell you somethin’. A lotta times, it ain’t good, it ain’t bad. It’s what you have.”