I was recently contacted by Canadian Blues legend Jack De Keyser to his recent release ” Checkmate” a tribute to the Chess Records that inspired him, along with a custom illustration on the back – this was a fun project, Jack is a super guy to work with- this actually shows a version that still had a couple tweaks left to be done – but you get the idea.

If you need custom art, design, logos, illustration or anything art related, give me a shout at grego@mojohand.com – I am always taking on new clients! 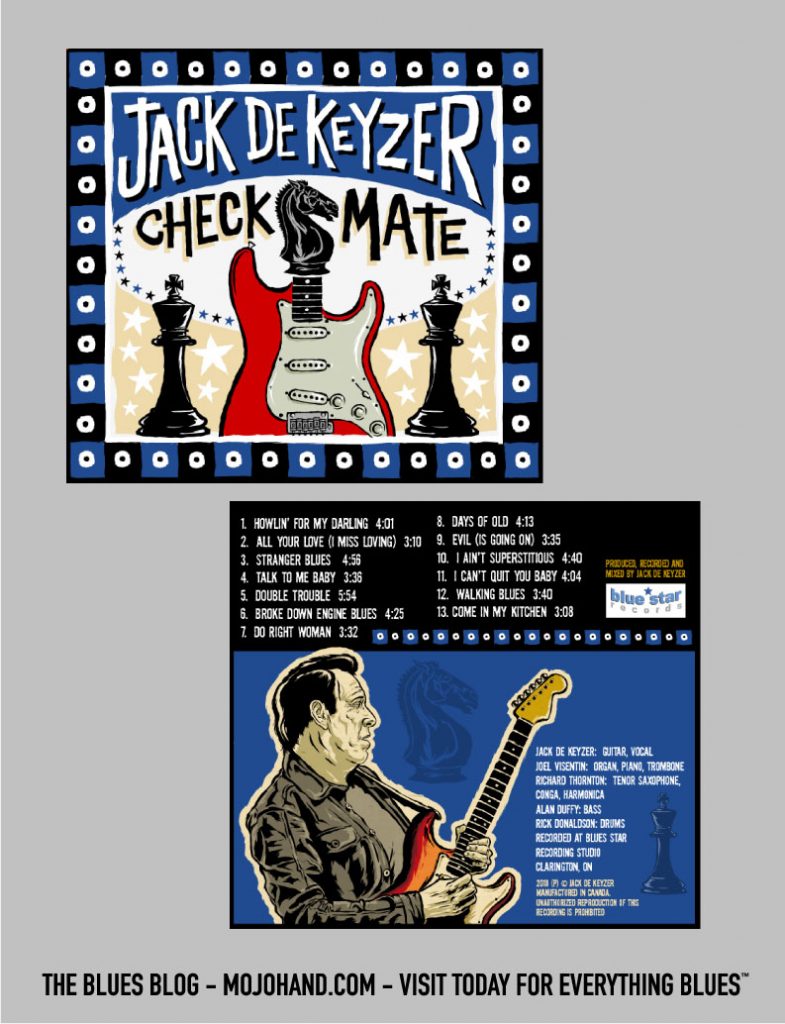 Here’s a Bio of Jack De Keyser – I suggest you look him up!

Guitarist, Singer, Song Writer Jack de Keyzer plays the blues world wide, from Alert, Arctic Circle to Puerto Escondido, Mexico; from Athens, Greece to Hornby Island, BC and many points between. One of Canada’s most awarded and  in demand live performers and session guitarists, Jack has released  10 CD’s and 1 DVD. He has also played on hundreds of recordings and live sessions with artists ranging from Etta James to Ronnie Hawkins and  Bo Diddley to Blue Rodeo.  He is an exciting live performer, soulful vocalist and world class song writer and  performs an average of 120 shows per year. De Keyzer  has brought audiences to their feet  at many major Jazz and Blues Festivals including the Montreal Jazz Fest, Blues Sur Seine (France) The Ottawa Blues Festival and Puerto Blues, (Mexico).  A much celebrated musician, de Keyzer has been nominated for the Juno (Blues Album of the Year) 5 times and won the Juno twice in 2003 and 2010. He has won 7 Maple Blues Awards (Canada’s national blues awards) , first place in the International Songwriting Competition and won CBC’s Great Canadian Blues Award from a  poll of radio listeners. Always touring with an incredible band, Jack will have you rocking in your seat and swaying to his hot  blues, soulful r&b and cool  soul jazz.  World class.