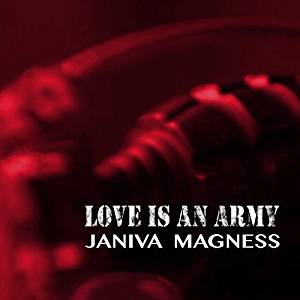 Detroit native Janiva Magness overcame tragedy and adversity in her personal life to carve out a career as a blues singer.  She earned a string of Blues Music Association awards and a Grammy nomination in the process.  Since leaving Alligator Records to launch her own label in 2014, Magness has expanded her musical palette to include touches of soul and Americana.  The newly released Love Is An Army is a lushly produced musical stew that blurs the lines between genres. The one constant throughout the album is Magness’ voice.  Weathered, passionate and full of heart of soul, Magness’ vocals cut through the mix on every track.

One sign of Magness’ power as a performer is her ability to hold her own next to a stellar collection of guest musicians.  On “Hammer,” Charlie Musselwhite’s thick-toned harp adds mojo to a bluesy groove and lyrics about persisting in the face of adversity.  Roots rock legend Delbert McClinton lends his weathered voice to the beautiful ballad “What Could I Do?”  Magness and McClinton created an aching tale of lost love that’s sure to tug at listeners’ heartstrings.  Poco co-founder Rusty Young adds pedal steel guitar and a touch of Nashville grit to “On and On.”  The energetic country-rock arrangement perfectly suits Magness’ lyrics about love and devotion.

Love Is An Army’s heady brew of roots music styles is made all the more potent by a judicious dose of social commentary.  On the defiantly optimistic “Love to a Gunfight,” Magness bares her soul on the vocals while a rich mix of organ and pedal steel guitar bring it home.  On the simmering blues “Tell Me,” Magness sings, “I’m not gonna cry when I should be fighting,” while the chorus exhorts listeners to, “Stand up/stand up.”  A winning combination of passion and top notch musicianship make Love Is An Army essential listening for roots music fans.