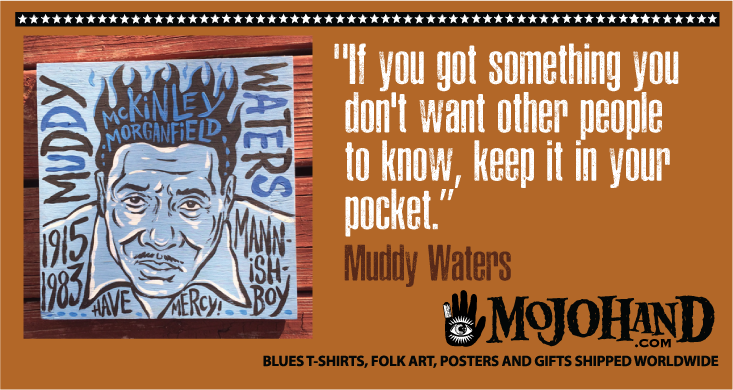 Words of wisdom from the finest Blues poets brought to you by Mojohand.com – the one man blues boutique, serving up Everything Blues for over 20 years.

My blues look so simple, so easy to do, but it’s not. They say my blues is the hardest blues in the world to play.
-Muddy Waters

Muddy Waters taught us “you don’t have to be the best one; just be a good ‘un” .. that just about says it all, always strive to be a good ‘un…’
-Billy F. Gibbons (ZZ Top)

We were in Mississippi. We’d been playing this music, and it had all been very respectful, but then we were actually there sniffing it. You want to be a blues player, the next minute you fucking well are and you’re stuck right amongst them, and there’s Muddy Waters standing next to you. It happens so fast that you really can’t register all of the impressions that are coming at you. It comes later on, the flashbacks, because it’s all so much. It’s one thing to play a Muddy Waters song. It’s another thing to play with him.
-Keith Richards

Muddy Waters is a prime influence for anybody who’s ever done anything rock ‘n’ roll.
-Van Morrison

Muddy was one of those very few who had true ‘charisma.’ He affected people in a spiritual way, both with his music and personally. I’ve had a lot of thrills while I was in Mud’s band, but the biggest was playing his blues with him onstage.
-Bob Margolin Published in Blues Review Magazine #20

The first guitarist I was aware of was Muddy Waters. I heard one of his old records when I was a little boy and it scared me to death, because I heard all of those sounds. Wow, what is that all about?
-Jimi Hendrix

I’d like to get something together – like a Handel, Bach, Muddy Waters, flamenco type of thing. If I could get that sound, I’d be happy
-Jimi Hendrix

Muddy was there at a time when, really, the music was getting to me. I was really trying to grasp it and make something out of it.
-Eric Clapton.

[Muddy Waters is] the most sexy blues man that I’ve ever encountered…. When he sings out ‘I’m a man,’ I mean, those [other] guys can’t even compare to what he’s got.
-Bonnie Raitt

We admired Muddy Waters and his music very much, and we played a lot of his songs in imitation of him. He encouraged us a lot before we met him –– when we just listened to his records, we were encouraged.
-Mick Jagger

You know, people talk about T.S. Eliot, Ezra Pound, William Carlos Williams and Robert Frost as the great American poets– – and they are. But for me, Muddy Waters and his peers and the great black jazz artists are the true poets of America. They sacrificed everything for their music, and they always kept their style and their dignity in times when it was very hard to do.
-Peter Wolf (J. Geils Band)

All the really great records or people who made them somehow came from Memphis or Louisiana or somewhere along the Mississippi River…And singers like Howlin’ Wolf and Muddy Waters gave me the feeling that they were right there, standing by the river
-John Fogerty

My influences were the riff-based blues coming from Chicago in the Fifties – Muddy Waters, Howlin’ Wolf and Billy Boy Arnold records.
-Jimmy Page

I knew instantly that was what I wanted to do.
-Eric Burdon, as a young man, after hearing Muddy Waters