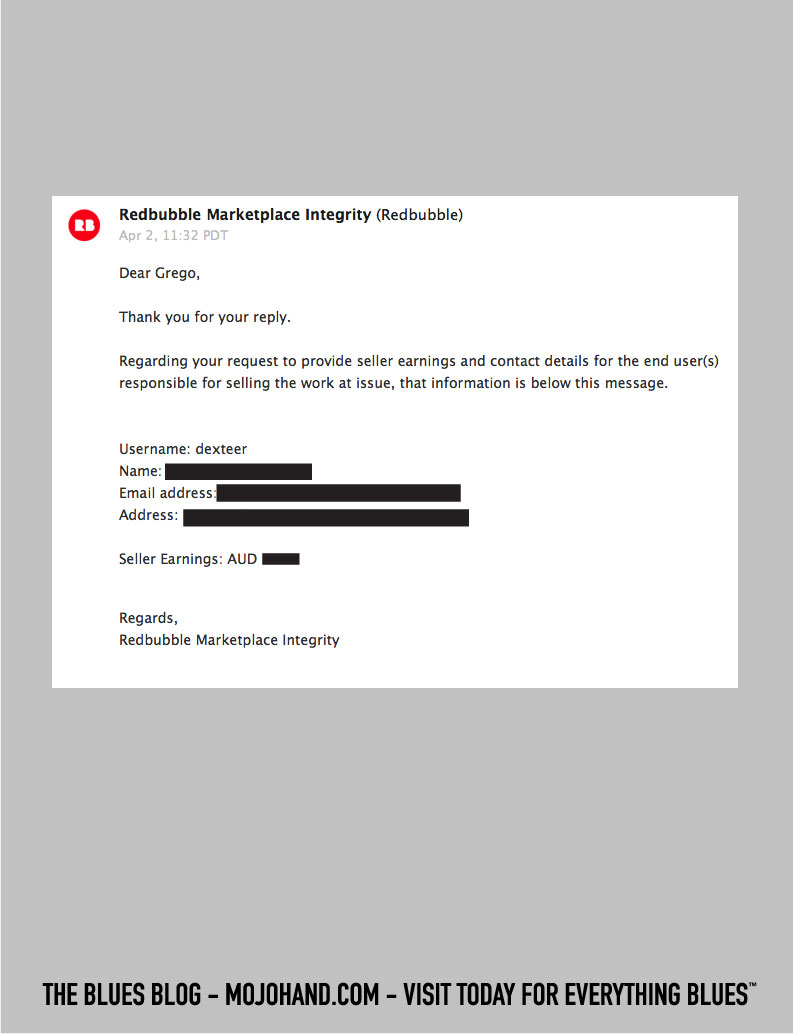 Redbubble is left red faced after a confrontation with Grego Anderson over stolen artwork and intellectual property theft.

Mega-corporation Redbubble.com got an earful and a well deserved verbal spanking from Grego Anderson recently, when Grego – Owner and operator of Blues music superstore Mojohand.com discovered the t-shirt printing company was offering illegal copies of his trademarked Blues folk art imagery. A French partner of redbubble who went under the name “dexteer” was illegally using Grego’s poster art on various garments throughout the global commercial site of Redbubble.com – who CLAIMS to be about helping artists and creatives find a marketplace and extra money.

“This was not the first time I had sent a cease and desist to redbubble, and of all the companies I have taken legal action against, they seem the most nonchalant about it, in my opinion.” Grego said about the incident. ” I was able to get the user banished, obtain all of his personal information including sales figures – even though I believe redbubble policy assures their users they don’t share such things, I could be wrong… very odd how they seem to work. At any rate, my constant pressure online thru my various social media outlets and fans helped make #boycottredbubble a trending topic, and they quickly began negotiating.”

To date, Redbubble has refused to make financial restitution for the theft of Grego’s intellectual property, so legal action and potential federal fines might still be in store for the mega-corporate entity known as redbubble.

If you see a bootleg or stolen piece of Mojohand artwork – let us know by clicking here with the URL of the offending item – you might be in line for a reward!