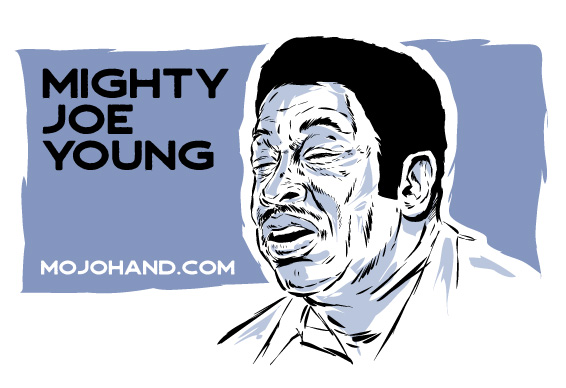 Born in Louisiana, Young grew up in Milwaukee. In his youth, he spent some time in Los Angeles as an amateur boxer before turning to music. In 1955, he moved to Chicago and spent a decade and a half scuffling in blues clubs, working as a sideman with Jimmy Rogers and Otis Rush, making occasional singles for small labels and acquiring along the way the sobriquet Mighty, an acknowledgment of his boxer’s physique and an allusion to the 1940s monster movie Mighty Joe Young.

At the end of the 1960s, he played second guitar on West Side Soul and Black Magic, historic sessions for the Delmark label by singer-guitarist Magic Sam. His own debut album for Delmark, Blues With A Touch Of Soul, followed soon after, and he also impressed with a dynamic appearance at the 1969 Chicago Blues Festival with his employer Koko Taylor.

On Blues With A Touch Of Soul, Young displayed his command of long, rambling single-string guitar lines in what would come to be called the West Side style, as well as an appealingly grainy voice and a predilection for the crisp orchestration of 1960s soul music. ‘I like a beautiful arrangement,’ he remarked, ‘not a traditional sound that’s the same all the time.’

The Chicago blues fixer Willie Dixon, who often used him on sessions, agreed: ‘He has a traditional sound which he is able to mix with a very modern style.’ Young’s career was shadowed by the greater success of younger, sexier performers like fellow West Siders Magic Sam, Otis Rush and Luther Allison.

Young was a pioneer in bringing blues to the North Side, a section of Chicago that was more attractive to white music fans than the sometimes volatile black enclaves on the West and South Side. Many college students remember Young at North Side blues clubs like Biddy Mulligan’s, Alice’s Revisited or the Wise Fools Pub, as well as his appearances at the Ann Arbor Blues Festival.

I went ahead and scribbled up a little portrait of Mighty Joe Young to add to this post. Be sure to visit my Blues folk art gallery by clicking here to see what new Blues artwork I have available!