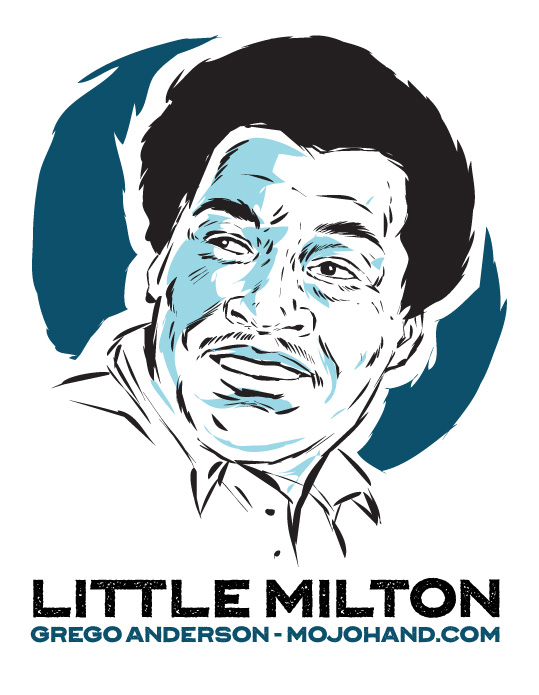 James Milton Campbell Jr. (September 7, 1934 – August 4, 2005), better known as Little Milton, was an American blues singer and guitarist, best known for his number-one R&B single “We’re Gonna Make It”. His other hits include “Baby, I Love You”, “Who’s Cheating Who?”, and “Grits Ain’t Groceries (All Around The World)”.

A native of the Mississippi Delta, Milton began his recording career in 1953 at Sun Records before relocating to St. Louis and co-founding Bobbin Records in 1958. It wasn’t until Milton signed to Checker Records that he achieved success on the charts. Other labels Milton recorded for include Meteor, Stax, Glades, Golden Ear, MCA, and Malaco. Milton was inducted into the Blues Hall of Fame in 1988.

Grit ain’t groceries has always been one of my absolute favorites, and for a long time was a staple in my set list back in Austin, Texas… I went ahead and scribbled up a little portrait of Little Milton to add to this post, and I have painted a few portraits of him in the past – but nothing recently. Be sure to visit my Blues folk art gallery by clicking here to see what new Blues artwork I have available!