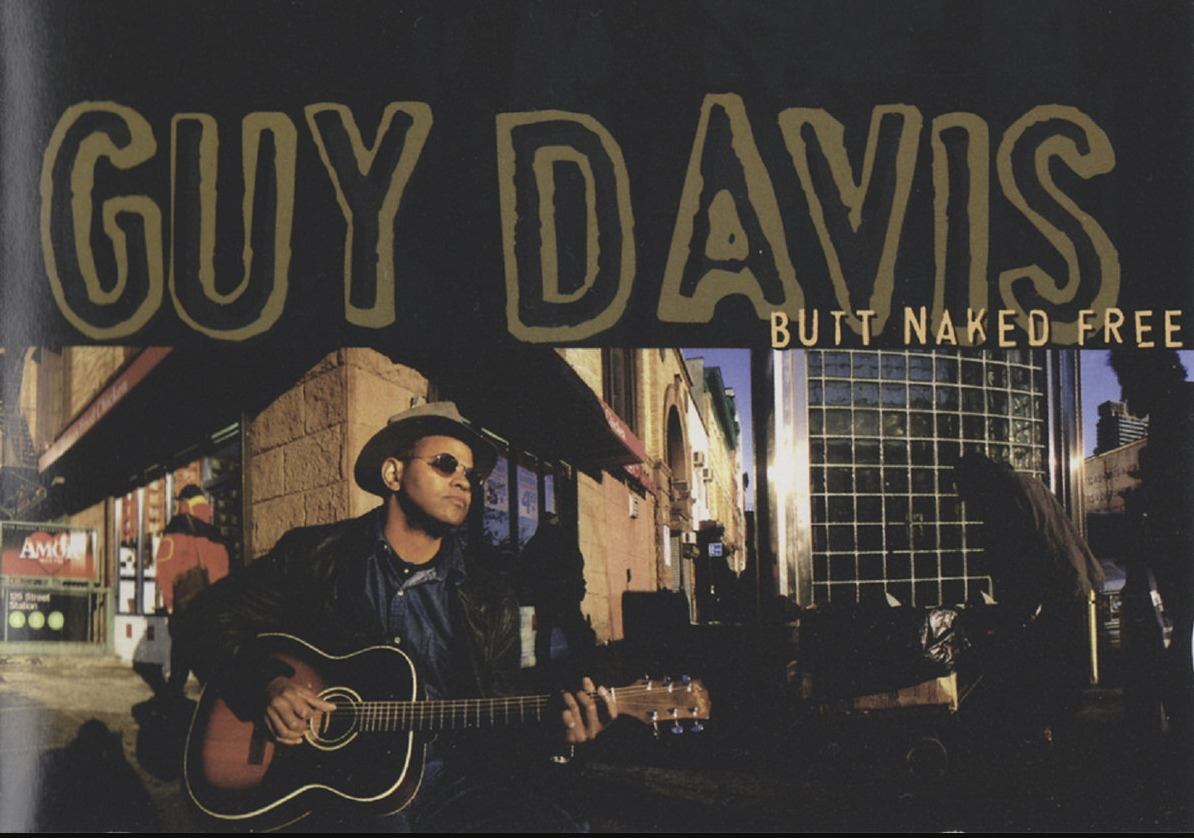 From Mojohand.com – The Home of Everything Blues since 2001, celebrating the music and the legends of the Blues art form

Guy Davis is an American blues guitarist, banjo player, and actor, Grammy award nominee in 2017 for the best traditional blues album of the year, won by the Rolling Stones. He is the second child and the only son of the actors Ruby Dee and Ossie Davis.

As a teenager Davis encountered the big-name electric blues of Buddy Guy and his Chicago contemporaries, and the folk blues of Taj Mahal, but he didn’t warm immediately to the music’s original acoustic form. “At first, I was scared of Delta blues,” he told the Toronto Star. “It’s so fierce, so harsh, with that slow, menacing stomp.” Davis switched from banjo to guitar and began to learn the East Coast acoustic blues style of Willie McTell and others, which tended toward a steady foot-tapping tempo and had a less elemental outlook than Southern country blues. Davis’s first experiences as a performer, however, were not in music but on the stage.

At age 16 Davis made his stage debut in a production of the play Cotton Comes to Harlem, directed by his father. In 1978 he recorded an album for the Folkways label, but was dissatisfied with it and did not return to music full-time for many years. Instead, Davis pursued a career as an actor. He won acclaim for his portrayal of a South Bronx disc jockey in the early hip-hop film Beat Street (1984), and was featured for a time in the cast of the television soap opera One Life to Live. Davis spent much of the 1980s performing with different New York theater groups, and by the early 1990s he had garnered his first starring role, as an understudy in Zora Neale Hurston and Langston Hughes’s Mulebone.

Returning to the Blues

What brought Davis back to the blues was his next stage production: he was slated to play 1930s Delta bluesman Robert Johnson in the 1993 play Robert Johnson: Trick the Devil. Davis was unsure of his ability to handle the role, but grew into it while participating in a French television documentary about the blues. Visiting Stovall’s Plantation in Mississippi, the birthplace of blues artist Muddy Waters, Davis tried unsuccessfully to extract a nail from the wall of Waters’s house as a souvenir. “Then the film crew shot me, and I put my hand on the house’s wall, and the second I did I felt something jump right out of the wood up my arm,” Davis told the Boston Herald. “That’s the moment I understood what the blues was. The life of those slaves was as hard as that Mississippi pine, the nails were as resilient as the people. I just started to cry and cry, and they filmed it! That was the crossroads of me. It brought the blues and my own people home to me. Then I went back to New York and played Robert Johnson to the very best of my ability.”

By 1994 Davis had written a one-man play of his own, In Bed with the Blues: The Adventures of Fishy Waters, and the following year he composed music for two television films. In 1995 he was signed to the folk-oriented Red House label, and since then has focused primarily on music rather than acting. He told the Toronto Star, “I sure hope I don’t ever have to choose between them but it’s a possibility.” Davis has credited his acting experience with helping him to focus his blues lyrics on a single idea or emotion.

Davis’s country blues debut, the live Stomp Down Rider, was released in 1995 and showcased the artist at his spontaneous best. Davis mixed country blues classics and originals in his concerts, with many observers noting how he had mastered the art of creating new pieces that seemed to blend smoothly with the likes of Johnson, Mississippi Fred McDowell, or Sleepy John Estes. Perhaps the works of the Tennessee-born Estes were a special influence; many of that artist’s songs were story-like depictions of people and places he knew, rather than re-workings of classic blues formulas, and Davis, too, emerged as a consummate storyteller in his recordings and stage appearances.

By 2002 Davis had released five albums: after Stomp Down Rider came Call Down the Thunder (1996), You Don’t Know My Mind (1998), Butt Naked Free (2000), Give in Kind (2002), Chocolate to the Bone (2003), and Legacy (2004). Mostly he toured and recorded as a solo act, but on disc he sometimes augmented his sound with small bands, including former Van Morrison guitarist John Platania, multi-instrumentalists Levon Helm (The Band) and Tom “T-Bone” Wolk (Hall & Oates, Carly Simon), drummer Gary Burke (Joe Jackson), and acoustic bassist Mark Murphy. These included unusual instruments such as the mandolin, the accordion, and the Australian didjeridoo—an unusual choice for the blues, perhaps, but fully in the spirit of the on-the-spot collections of instruments that early Memphis blues bands might use as the need arose. Davis picked up his first didgeridoo in Australia, and learned to play it for the song “Layla, Layla” on Give in Kind. “I added the didgeridoo. … to the part where the slide guitar is making the woman’s voice, thinking it would make it into a dialogue,” Davis told Bluesrevue.com. “The didgeridoo becomes the aggressive guy, kind of that ‘barking dog’ sound. Then the rest of the song just took shape around that.”